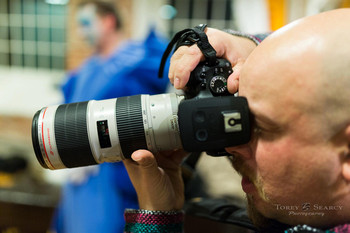 Originally, I considered myself a musician. I studied music beginning at the age of 15. Though I played in a few jazz and blues clubs, I gravitated towards more progressive and experimental music. I always had a love for the abstract. During the "music" years, I was also a photographer...a weird one. In 2011, the creative outlet that was music fully became photography and a creative explosion occurred that was unlike anything I had ever experienced but the vision and love for the abstract and weird remained the same.

I've always loved the artwork of Salvador Dali and M.C. Escher. I love the madness and genius of Hunter S. Thompson and the unique storytelling of Stephen King. The works of David Lynch make my mind explode. Before my creative explosion in 2011, I discovered the work of Rusty MacDonald (DividingMe Photography). Though we are friends now and he'll probably blush or shoot me for putting this in my "bio", it is absolutely true that discovering his work when I did was very important because it both made my mind run rampant and it showed me what was possible at just the right moment in time.  Shortly after that, I discovered the work of people like Brooke Shaden, Jerry Ghionis and Lindsay Adler and my mind further exploded.

But am I like any of those people I just mentioned?  No...but some part of each has likely helped to shape the artwork that you see on this page.  Welcome to C Perry Studios.